Have a question for the Downtown Project Team? Send an email to downtown@crossfieldalberta.com

If you were unable to join us for the Virtual Open House, watch it here:

The following drawings were shown during the Open House and can be downloaded if wanted:

Open houses were held Nov. 13 and 14, 2019 to allow the owners of businesses along Railway Street and the general public to meet the project team, view the design concepts and ask any questions they might have.

If you were unable to attend one of the open houses, check out these documents:

Any questions about the project can be directed to downtown@crossfieldalberta.com

The work being undertaken on Railway St. will necessarily require road closures and alternative routes. A Traffic Accommodation Strategy has been developed and includes the following highlights:

The next section of Railway St. between Chisholm Ave. and the Shell closed Sept. 21. Access to Carmen's Big Way and Mountain View Financial will be via Osler Ave., and access to the Shell will be via a temporary entrance at the southeast corner of Limit Ave. and Railway St.

The alley between Nanton Ave. and Hammond Ave. is only accessible from the east. 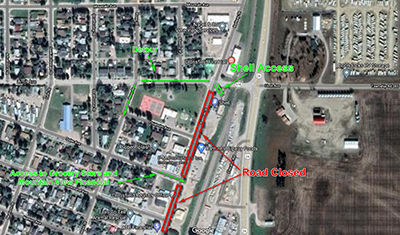 Have you ever attended a Crossfield Town council meeting?

The Crossfield Fire Department puts the current fire rating at low. No permits will be issued until the rating is lifted.

Enhanced public health measures enacted Nov. 24 by the provincial government DO APPLY to our community.