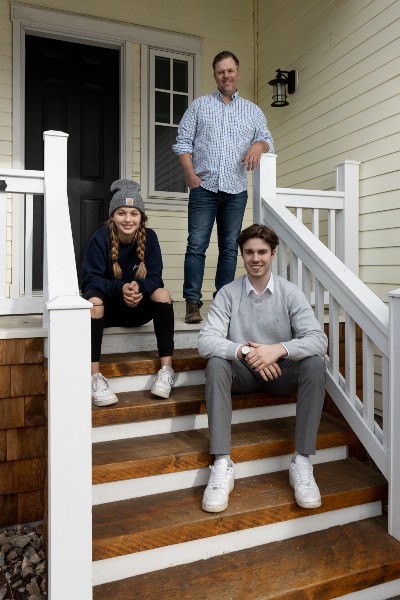 Tristram Cottier (back) and his kids, Brooklyn (15) and Alastair (18) pose for photos at their home in Iron Landing.

After living in Airdrie for several years, Tristram Cottier welcomed the opportunity to return to Crossfield and build a home near Veterans’ Peace Park.

As the owner of Wolf Construction, Cottier knew he would build the home of his dreams but it wasn’t until a lot on Harrison Street – just on the outskirts of Iron Landing – opened that he found the perfect location. Four years later, he and his family still love the peaceful community filled with friendly neighbours.

“I really like Veterans’ Park. It’s such a big park and I just love it, so I jumped on the chance to get on a lot that close to it,” he said, adding the large lot sizes in Iron Landing are a benefit, but the proximity to the park can’t be beaten.

“It’s big enough so that you can go for a walk in it and stay in the park and you’re not bumping into other people. It’s almost like you’re living in the country,” he said. “It definitely has something special about it.”

That country-feel extends to the people who make Iron Landing a community.

“I’ve noticed that all the neighbours are friends up here,” Cottier said, adding before the pandemic, he could look out his window on a warm summer’s night and see neighbours going from garage to garage visiting with each other. “They all sit out and barbecue, hang out and just take it easy.”

The father of two first came to Crossfield about 16 years ago.

“What initially brought us here, and what brought us back here, is just all about children. It’s the perfect place to raise kids,” he said. “We spent a lot of years in Calgary, and we came out here and it’s calmer. Kind of like how I remember growing up, when it wasn’t so controlled and kids could go out and play at night and you weren’t too worried about them.”

Another thing he’s appreciated about life in Crossfield is the effort the Town has put into improving infrastructure.

“Years ago, when I came to Crossfield, it was sort of a dying town. There wasn’t a lot of growth and things were sort of falling apart,” Cottier said. “But it’s definitely turned around with a lot of effort and a little bit of determination.”

Though he is happy to see the town grow, he said people moving from the city have different expectations than those used to the more relaxed way of life in Crossfield.

“Every town has its challenges, and for Crossfield, that challenge is maintaining its small-town feel,” Cottier said. “That may be a challenge, finding that balance.”

However, he is quick to encourage newcomers to the community.

“If you’re in the city and you want to raise your kids the way you remember being raised, Crossfield is as good a place as any without sacrificing all the amenities of the city because the city is just 20 minutes away.”