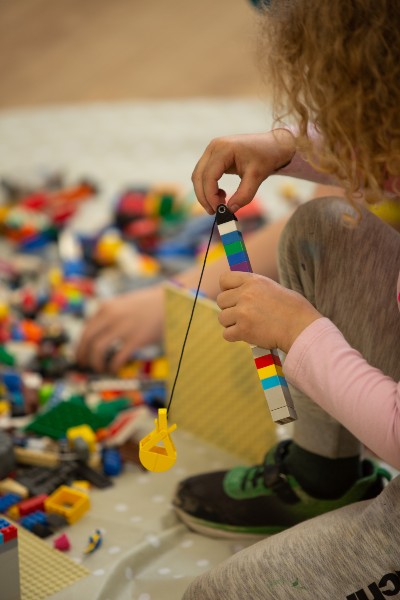 Local children let their imaginations run as they build with LEGO during the Crossfield Municipal Library's LEGO Club meetings.

Crossfield may be a small town surrounded by larger cities but that doesn’t mean parents have to take their kids into the city to keep them busy.

The Crossfield Municipal Library offers a variety of programs for kids to work together and explore their imagination without having to travel far from home.

The LEGO Club is one of those programs and has been well attended for years, according to Ilene McInnes, program co-ordinator at the library. The club is free for kids ages five to 12 and runs Mondays from 3:45 to 4:45 p.m. throughout the school year.

COVID-19 restrictions forced staff at the library to take the club online. Beginning in December 2020, the after-school program was held on Zoom – a video conferencing web platform – with members logging in from the comfort of their homes.

“I miss interacting with them personally,” McInnes said. “Before COVID, they worked together. A lot of times they team up, so it’s really good for just getting together and working together.”

McInnes has been running the program for almost two years and pre-plans scenes such as theme parks, animals, robots and seasonal scenes for the participants to make each week.

“For example, last week we did a greenhouse and then different things to go with that. The week before, we did a space kind of theme,” she said. “After they’ve done their plan, I add onto it or, if they’re getting bored, then I kind of do a free build.”

The kids usually build onto existing scenes each week, but at home they only have so much LEGO to work with and their pieces might vary. McInnes said the library purchased LEGO so club members could continue to participate on Zoom while the Library was closed.

“We have little friendly competitions and projects,” she said. “It’s not all exact pieces and I don’t have instructions – it’s their own imagination.”

McInnes builds the scenes at home on Zoom, as well, and gives suggestions to help guide the kids in a new direction if they seem stuck.

Brittany Maciuk said her six-year-old son Hudson loves participating in the program each week, even over Zoom.

“Ilene is amazing with the kids and is building along with them and keeping them engaged. She is encouraging and my son adores talking with her each week,” Maciuk said. “It is amazing to have something like this in our town that allows our kids to use their imaginations and be able to socialize with each other.”

When COVID-19 restrictions were first implemented in the spring of 2020, the library had to limit the number of participants in the program, distance them and keep the LEGO pieces separated for each member. Some members chose to wear masks before they became mandatory in the province.

“They did well separated but it was really fun to see them interact with each other and just kind of talk it out and plan,” McInnes said. “Kids need to get out.”

Prior to the implementation of the COVID-19 restrictions, the program was usually full with as many as 27 kids in attendance each week. McInnes said it was usually the same kids returning week after week, with most members from Crossfield but some travelling from Airdrie as well.

The library also offered a craft club on Zoom – a program implemented in 2020 for kids ages six and older. McInnes said the crafts were pre-packed and available for curbside pickup.

For more information on the library and its programs, visit crossfieldlibrary.ca